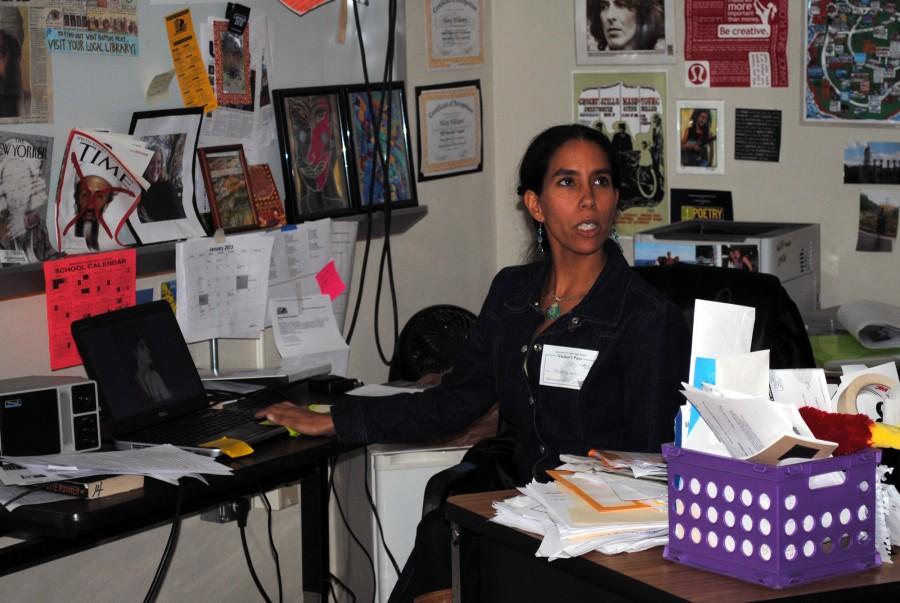 As she toured the high school, Saaba Buddenhagen Lutzeler noticed differences in its appearance: The front doors were no longer red, the ceilings were lower, and there was air conditioning.

Overall, though, she found that U. City changed relatively little in the 21 years since she graduated.

“The building itself is pretty much the same,” she said. “It feels really natural to be here.”

Lutzeler visited the district from Feb. 4-7 as U. City’s Returning Artist of 2013. Each year since 1994, the Returning Artist Program has featured a U. City alumnus who’s found success as an artist, according to ucityschools.org. The artist spends a week touring the schools to enrich and inspire students.

Lutzeler, a 1992 graduate, is an award-winning painter known for stylized portraits, often commissioned pieces. She has collaborated with numerous artists in St. Louis and California. Her works have been displayed in many exhibitions around the country and have won her several awards, including the Margaret E. Leslie prize in drawing, according to her website, saabastudio.com.

Lutzeler, who went to U. City schools from kindergarten through 12th grade, credits her time in the district with her decision to become an artist.

“The first time I thought I might ever be an artist, I was in fifth grade,” Lutzeler said. She won first place in a contest to design a snowman, she said, and went on to win other art contests with the support of her teachers.

“My teachers encouraged me and praised me, and it planted that seed,” she said.

High school in particular left a lasting impression on Lutzeler.

Lutzeler also had support from her parents, who were also artistic. Her father was a mathematician who made geometric sculptures, and her mother cooked elaborate dishes, she said.

“I grew up with creative thinking in my home,” she said. “My mother was probably my biggest supporter.”

Lutzeler was active in high school activities, including student council, the National Art Honor Society, and NHS. She was also the student representative to the school board.

She received her BA in studio art from Kenyon College in Ohio in 1996 and also studied art in Tasmania, Australia.

“Doing well in school helped get me a full ride to go to college,” she said. “Laying down that…academic foundation…continues to help me.”

Lutzeler spent nearly a decade in California before finally returning to her roots in St. Louis. “I came home,” she said. “I’m just getting back into the St. Louis scene right now.”

Lutzeler enjoyed her time at U. City, but she wishes she’d connected with her teachers more. “If I could do it over again, I would be better at staying in contact with my teachers,” she said. “Your teachers, they give you everything.”