Seoul Taco in the Loop 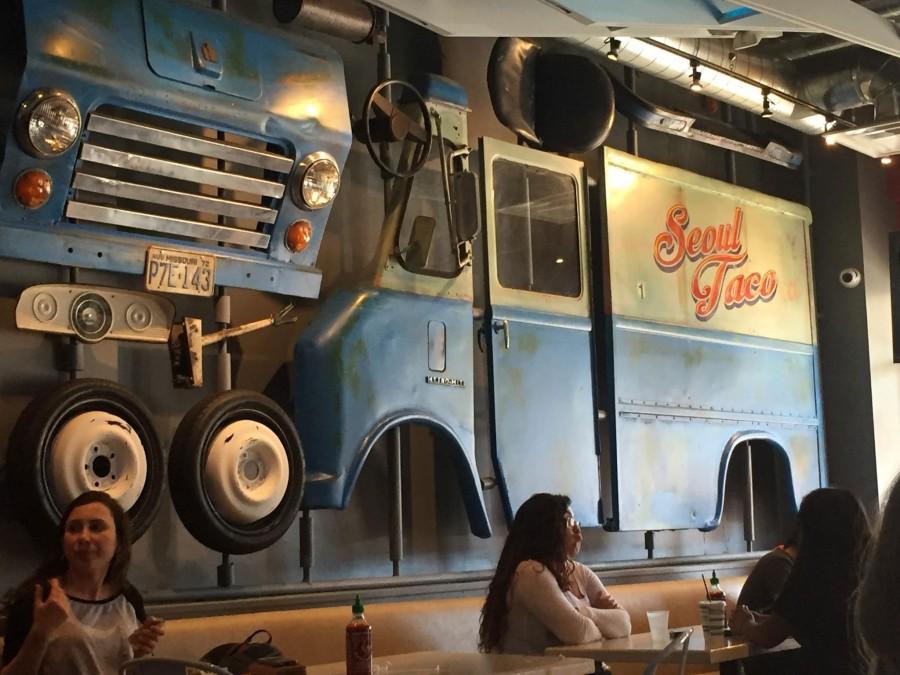 Seoul Taco began as a taco truck which was dismantled and now hangs on the wall in the restaurant. They now have another food truck and a brick and mortar restaurant in Columbia, MO.

On the edge of the Delmar Loop, replacing the former Ginger Bistro, a new restaurant offers two different dining style options. Owner David Choi turned his taco truck into a brick and mortar restaurant, keeping the name Seoul Taco which serves Korean barbecue with a Mexican twist. Dishes include burritos and tacos fused with Kimchi rice and Seoul sacue. Attached to Seoul Taco is Seoul Q, where customers can grill their food at their table.

On the Seoul Taco side, the walls are decorated with a mix of Korean and Mexican. A retro Seoul taco truck on the wall symbolizes the origin and concept of the restaurant. Once this eatery hits around lunchtime, lines are usually to the door because it’s a fun and affordable place to kick back and relax with friends.

A normal lunch at Seoul Taco consists of a burrito, Korean taco and bowls, at an affordable price. In each dish is a combination of Kimchi rice, lettuce, Kimchi, Seoul sauce and your choice of meat (chicken, pork, beef) for under $10. The tacos are made of with soft and chewy shells with a filling of your choice for only $2.50. There is also a tofu version of both burritos and tacos for vegetarians. The menu also consists of Kimchi, which is a traditional dish that is made with fermented cabbage marinated with seasonings. Kimchi can be a side to any desired dish. The pot stickers are doughy with a firm filling of minced pork which comes with six for $5. The Golgi Bowl is for salad lovers and is made with rice, fresh veggies, fried egg, carrots, green onion, sesame oil, and spicy Gochujang pepper sauce and can be paired with your choice of meat and fried rice for a dollar extra.

In the Loop for about 8 months, Seoul Taco looks rather lavish for most students’ taste. However, it was explored by senior Eniah Harris it is now the number one spot for her and friends to go and enjoy a good bowl or two.

“I discovered Seoul Taco from a friend,” said Harris. “I was skeptical about the food until I had a Golgi Bowl and ever since it has been my favorite food joint.”

While Harris prefers Seoul Taco over any other food joint in the Loop, however, it’s not for everyone. Senior Korinna Brandt says she dislikes the taste and texture.

“I don’t get why people obsess over Seoul Taco,” said Brandt. “They have good food but if you don’t like spicy food then it’s not a good place to eat.”