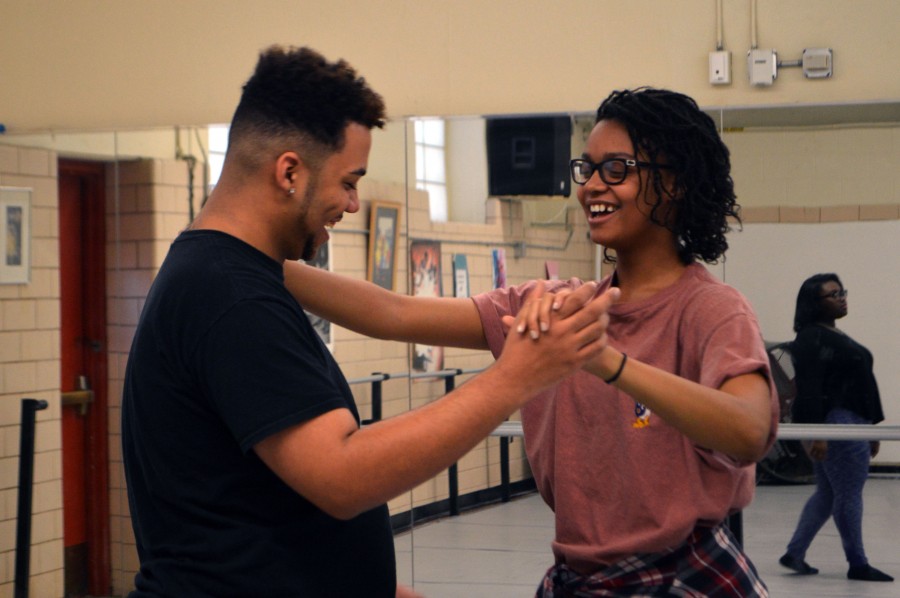 In the dance studio, male lead Joshua Mayfield, senior, learns the waltz for the song "She's in Love" from Raven Bullard, junior and female lead

The lights, the rush of excitement, the electric feeling running through your body, the chatter coming from the audience. Exactly the feelings performers live to experience. With the spring musical on the horizon, the performers are practicing almost daily and setting the stage for a weekend of “The Little Mermaid” Feb. 26 -27.

For sophomore Della Cox, her desire to perform started in preschool when she took circus classes at the City Museum. Later she took classes at C.O.C.A. and now gets booked for circus acts through a company called Circus Kaput.

“I like performing because you can take pride in people’s smiles,” said Cox. “During a circus performance at C.O.C.A., the director’s friend told me that my smile made her day. It’s magical that you can share your experience with other people and influence them in a positive way.”

Cox plays Ariel’s mer-sister, Arista, in the upcoming production. Cox decided to audition in December to follow her passion for the arts.

“I think music is something that you can listen to and like, but with musical theatre you can feel with the song and relate to it and feel the emotions the person in the song is feeling,” said Cox. “I’m a performer and I like to experience other people’s lives. In this case, you can actually live under the sea as royalty.”

“I never auditioned for any of the school musicals at my old school, Ritenour,” said Mayfield. “When I came to U. City, I was put into theater and Mrs. Ibnabdeljalil convinced me to audition for ‘Catch Me If You Can,’ and I did.”

While Mayfield was moved by “High School Musical,” Daniel Williamson, senior, takes his inspiration from “The Little Mermaid” movie.

“I have a strong relationship with Ariel,” said Williamson, who plays a chorus member. “She’s not happy in her situation; she’s adventurous and explores without thinking of the consequences. She just dives in head first.”

Wherever their passion comes from, the musical will be full of strong, motivated and dedicated performers.

“With ‘The Little Mermaid,’ you’ll see a positive, fun energy in the form of the ‘Under the Sea’ number,” said Cox. “You’ll see a lot of rebellion and passion. It’s a comical show, and you won’t see the actors, you’ll see the characters.”