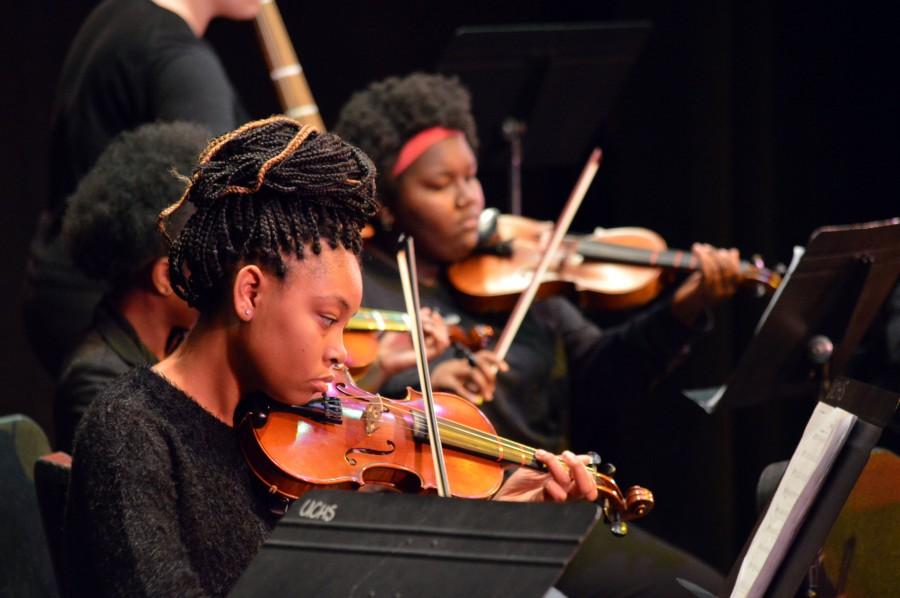 Second violinist Sarah Garner, freshman, plays in her first high school orchestra concert. Garner has been playing the violin since sixth grade. Her favorite song they performed was the theme song to the popular British show, “Downton Abbey.” “This was my favorite piece because it had a beautiful melody,” said Garner. “The first violins started with the melody and then the seconds came in followed by the cellos. It made a beautiful sound."

The performing arts dept. showcased their skills in December at three concerts, including Kinesis, choir and band/orchestra.

“The jazz band and choir didn’t perform at the winter concert with us this year,” said Kaitlynn Douglas, senior, who plays the flute and piccolo. “This meant the band got to play more since they weren’t there. There was less of a turnout and a shorter program than past concerts.”

The band played a total of five songs including St. Louis Blues, Manhattan Beach, Blues March, and Christmas at the Movies, which was a crowd favorite.

“We got to play more songs which I liked,” said Marco Gillespie, sophomore and percussion player. “There’s always room for improvement, but overall we did a good job.”

Following the band came the orchestra who finished the concert strong with songs such as “Japanese on a Fantasy Folk Song,” the “Downton Abbey” theme song, and “Symphony No. 3.”

“I thought that overall the concert was fun, although we could have been better prepared,” said freshman Nicole Holohan, cellist. “It wasn’t that much different from playing at Brittany Woods, except for the amount of people.”

The orchestra has grown, within a year, from a small class of eight people to full class of 16. The class this year has a majority of freshmen, which is a big change.

“The orchestra definitely has a bigger sound because of the amount of people,” said Jonah Payne, junior and violinist. “The freshmen add strong personalities to the class, but it’s all about teamwork.”