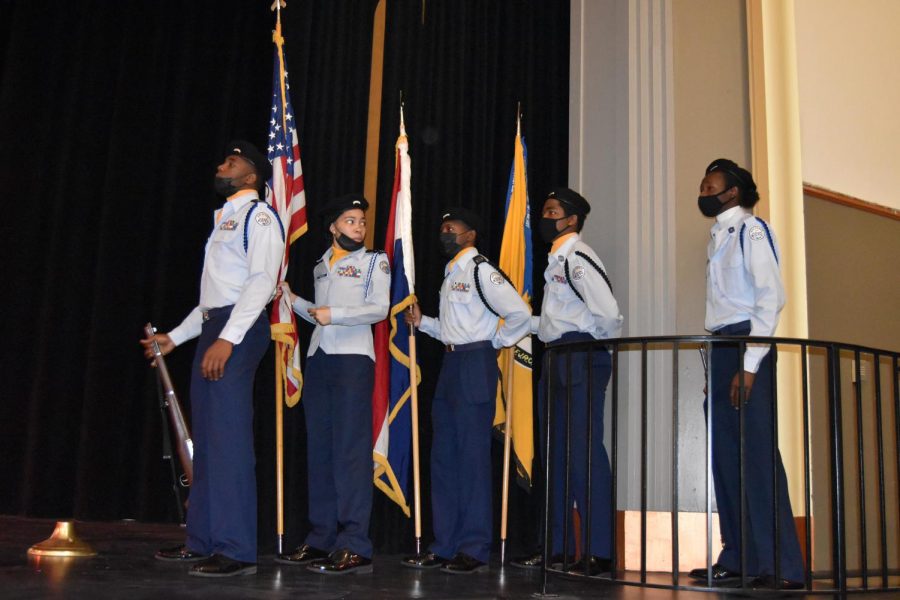 For the first time ever, the JROTC Veterans Day ceremony, was held in the auditorium, but without an audience. Instead, the ceremony was live streamed with the help of Ashley Jenkins, head athletic trainer and JROTC cadet captain Kouessan Dotou, junior.

The event was mainly run by the leadership of JROTC, consisting of juniors and seniors with the support of Col. Robert Jakcsy and MSgt. Darrel Stewart. During the preparation for the ceremony, the cadets ran over the whole ceremony during their training and free times.

“Considering this is the first year we ever tried to live stream it, I thought it went extremely well,” Jakcsy said.

In the two years she has been in JROTC, Tamara Dailey, sophomore, has sung the national anthem for the program and many people were impressed including squadron commander Xavier Blake, senior.

“The national anthem was great, Dailey did awesome,” Blake said.

After the national anthem, Gabrielle Bogan, junior cadet, read for each fold for the flag folding ceremony. Cadets Gayle Stevenson, junior and Jordan Stokes, senior, performed the flag folding and with only three days of practice, they did it with no mishaps.

“We had two cadets do the flag folding ceremony and I thought they did an excellent job as well,” Jakcsy said.

When the flag folding ceremony was over, Jeremiah Jackson, senior cadet, brought the drill team onto the stage for a drill demonstration.

“The drill was fire, no cap,” Blake said. “In my opinion, the best part. They were crisp and clean and I’m looking forward to seeing what they can do at drill competitions.”

One of the newest members of the drill team is Azariah Estes, senior at Ritenour High School, Estes is unique to the U. City JROTC program in that she comes from Ritenour to participate. With a goal of going into the Air Force, she wanted to experience some of what it would be like.

“My school has never or doesn’t do anything like that, it was pretty cool and interesting that the whole school pretty much dedicates a certain amount of time to watch JROTC do their thing and just learn about military things,” Estes said. “Especially with me trying to go into the military it was just nice being able to learn something myself and be a part of something the whole school does.”

In order to join U. City’s JROTC drill team, Estes had to speak with her counselor and the JROTC instructor.

“I asked my counselor and she thought I wouldn’t be able to join, but I told her that since I have connections with Col. Jacksy and MSgt. Stewart and if I asked them if I’d be able to join,” Estes said. “And I did and they said yes.”

For a full viewing of the ceremony, go to UCitySchools YouTube channel.