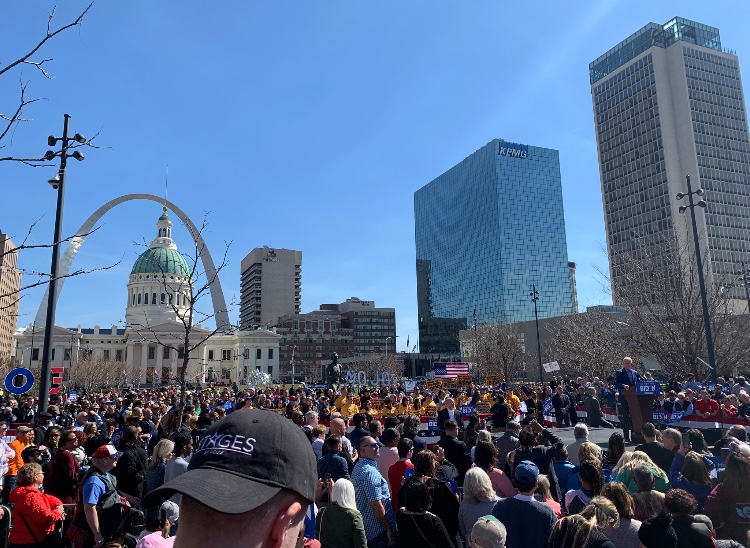 Joe Biden speaks at a rally in downtown St. Louis on March 7.

After a miserable debate scene, the Democratic candidate represents the only hope left

I watched the first 2020 presidential debate and I was appalled. I was exhausted. I was demoralized.

It was everything that could ever be said and nothing at the same time.

I can’t even think of the correct word to describe it. There are far too many words that fit perfectly but far too many that don’t suffice.

I have never felt so much and so little at the same time.

Voters and analysts can debate the policy and positions of Joe Biden and Donald Trump for an eternity. Pollsters and news anchors can trivialize their stances; they can fact check their facts, criticize their opinions.

It does not matter.

This election has evolved past the point of policy. We no longer have the luxury of voting for our individual values; there is only hope. Hope that we can exist in a country with leadership that might listen; hope that we can speak up for our values without being shouted over; hope that hope can still exist because right now it has been quashed and beaten with no regard to how fragile and fledgling it really is.

I cannot truly comprehend what I witnessed on Tuesday night, nor can I say I am entirely surprised. I knew it would be a bloodbath; I knew I would take little to nothing away from the candidates themselves that I didn’t already know. And I was right. Highlighting anything positive from the 97 minutes of uninterrupted calamity is an impossible task. I can say nothing good about anything in particular. I can only remember squirming on my couch cushion as an unprecedented mess was vomited from the mouths of the men with the microphones all over the television screen.

If there can be any takeaway, this debate illustrates the pointlessness of modern American politics. I never believed, in even my most infantile imaginations, that I would ever witness a shouting match between the intended leaders of my country. I never, in my wildest pretenses, could have predicted that I would listen to my president mock the deceased son of his opponent, or refuse to condemn white supremacy, or see the opponent exclaim “Shut up man” because the moron incumbent can’t use any other cavity of his face besides his mouth. I never believed that a descent into madness in the realm of what happened Tuesday night would ever be publicly broadcast to children, that we the people could ever allow this to be acceptable. How could anyone watch and feel proud that our presidential candidates are hurling insults like chimpanzees flinging their feces at the glass that divides them from their spectators?

We need a change. Plain and simple. There is nothing else I can say about the disaster that is the 2020 election. We allowed this to happen, now we have a chance to fix it.

Joe Biden is not the savior of the American people. I don’t think there is a soul alive who could possibly think he is. He is outdated and boring. His past is questionable. But so is his future, and that alone should be enough to set him apart from the “clown” he has to “debate” with. Even the sheer possibility that a Biden presidency could represent a stable environment in which America can progress as a nation is infinitely better than the alternative. Because we know, without any doubt, what that alternative is, and we know because we are living in it. The shouting-match first debate is just another byproduct of the continuing downward spiral that began four years ago. As Michelle Obama put it at the Democratic National Convention, “It can and will get worse.”

I can’t imagine what could possibly be worse. Let’s make sure we don’t have to.

The task seems so simple, but its completion will determine the legacy of America for an unprecedented amount of time.

How can anyone feel like there is an option besides Joe Biden?