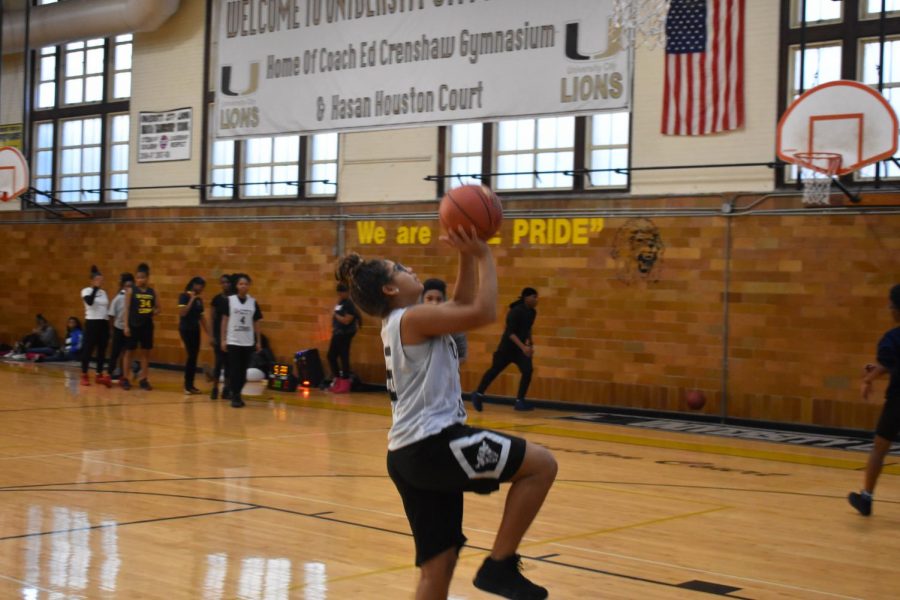 At practice, Ayanna Williams, junior small forward, goes in for a lay up. “A jump shot is my favorite shot because it’s closer to the basket and easier to score,” Willams said. “ You are supposed to put your all into the shot.”

After finishing with a win percentage below .500 last season, the Lady Lions are looking to bounce back this year with a larger team and the addition of many new underclassmen. Junior Essence Green has been on the team since freshman year, and feels that this year’s team is the strongest she’s been a part of.

“In my freshman year, we lost a lot of seniors,” Green said. “In my sophomore year, we were rebuilding, but this year we have a lot of good players.”

In addition to their talent, the team is the biggest it’s been in over five years, which Green feels has been very beneficial.

“We’re building a family and trying to win as many games as possible,” Green said. “I feel like we can get a winning record this year.”

Senior Alexandria Hogan-Wilson has been on the team for four seasons, and has played alongside many different sets of teammates. Like Green, she feels that this year’s team is the strongest it’s been in recent years.

“We have girls that actually want to play basketball this year,” Hogan-Wilson said, contrasting this years squad to ones of the past. “We [have] grown individually and together, as a team at practice.”

One of the biggest goals for the team is creating a sense of camaraderie, something that Hogan-Wilson feels is a major expectation for the season.

“[I expect the team] to become a family and work together, despite our weaknesses,” Hogan-Wilson said.

The Lady Lions are led by returning head coach Dana Walker, who feels optimistic about the new season. When asked about her new squad, she had nothing but praise for them.

“This year the team is more versatile,” Walker said. “We don’t have [just] one person to go to, we have a mixture of people.”

Additionally, the team’s chemistry is right where she wants it to be.

“They’re playing together this year, they’re making every practice, and they seem more excited than usual,” Walker said.

Many of the players set personal goals for themselves this season, which Walker hopes to see them meet. However, she also stressed the team’s overall objective.

“[Our goal] is to have a winning season,” Walker said.

With a handful of new talent mixed with veteran experience, the goal feels achievable to the team.