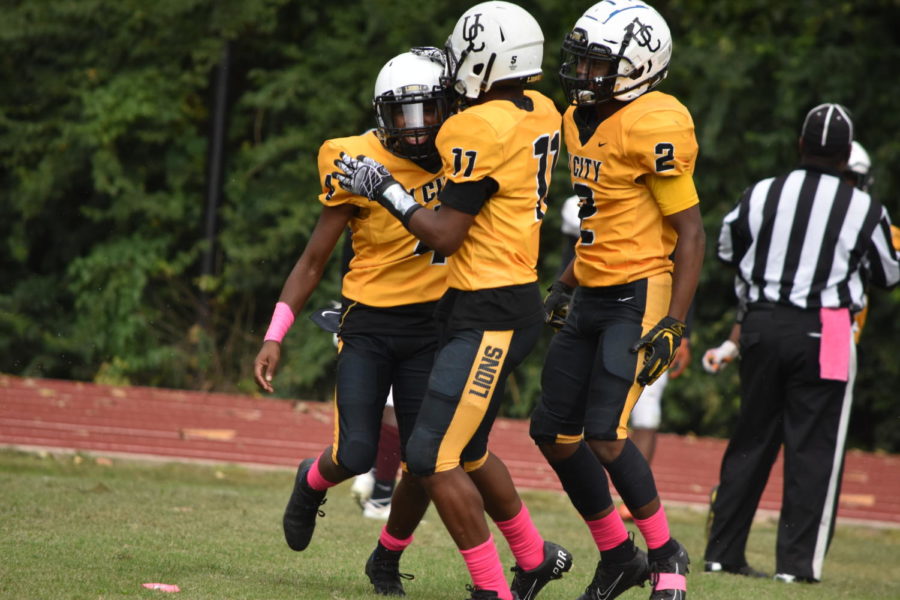 The Lions have experienced many ups and downs this season, and while many believed this year would be a repeat of the previous losing season, the team managed to pick up a win on Homecoming weekend.

The stands were full of anxious fans, making it no surprise that it was the most well-attended game of the season so far. The first quarter consisted of no scoring, with penalties pushing the Lions back from scoring range. Though the first few minutes of the game were slow, U. City fumbled the football a little over seven minutes into the first quarter, which was recovered by a Soldan defensive linemen. The Lions, however, shut down their drive with oppressing defense. Dariaun Pointer, a key player in the game, had five defensive tackles and five assisted tackles, with a recovered fumble in the second half of the game.

“We were always taught to stay on the fries (game plan), and with me playing only one position I tried my hardest to stay focused on that one position,” said Pointer.

It wasn’t until mid-way through the second quarter that Soldan scored the first touchdown of the game with a run by quarterback Brandon Bunting. The Lions wouldn’t get their own touchdown until seven minutes into the third quarter, when quarterback Lawrence Coleman, senior, bombed a super deep pass to Isaiah Harris for the score. This tied the game at 6-6, until Patrick Fuller, kicker, scored the extra point, giving the Lions a one-point edge with a little more than seven minutes left in the third quarter.

“I’m happy, I’m proud of myself,” Fuller said. “I don’t normally get that much recognition because I’m just a kicker, but I’m glad I was able to help the team.”

Soldan tried to charge back, but was quickly shut down by the Lions defensive line. The U. City defense played a major role in determining the victor. Players such as Jalen McKee, junior, Josh Allen, sophomore, and Dariaun Pointer, junior, proved to be a standout players, as they all had major tackles throughout the game.

The pressure was on for Soldan, and they fired back with a vital pass, giving them the first down with 4:10 minutes left in the third quarter. This led to a goal line stand by the Lions’ defense, resulting in a turnover on downs.

During the fourth quarter, in the midst of the heated battle between Soldan and U. City, the weather took a turn for the worse, with a light rain that caused some once-ecstatic fans to leave the game. However, U. City couldn’t be stopped from scoring after an interception. A touchdown was scored after a strategic pass from Coleman to Isaiah Harris, sophomore, with just under six minutes left.

“I honestly don’t think I played that strong, but when you throw, no matter how you throw, you have to keep your head in the game,” said Coleman. “Think about how many interceptions Tom Brady threw, but he’s still one of the best in the game. You just have to stay focused and keep working hard.”

With the Lions ahead 13-6, the game seemed decided until Soldan scored a late touchdown pass with only a little over three minutes left in the fourth quarter narrowing the score to 13-12. Attempting to tie the score and go into overtime, Soldan went for the onside kick, but the defensive line stayed strong, and denied Soldan the ball, sealing the victory for U. City.

“I was proud of the team, and I believe moving forward we should train more and work on perfecting our plays,” Jason Wells, head coach, said.