Rhiney hopes to take his game to next level 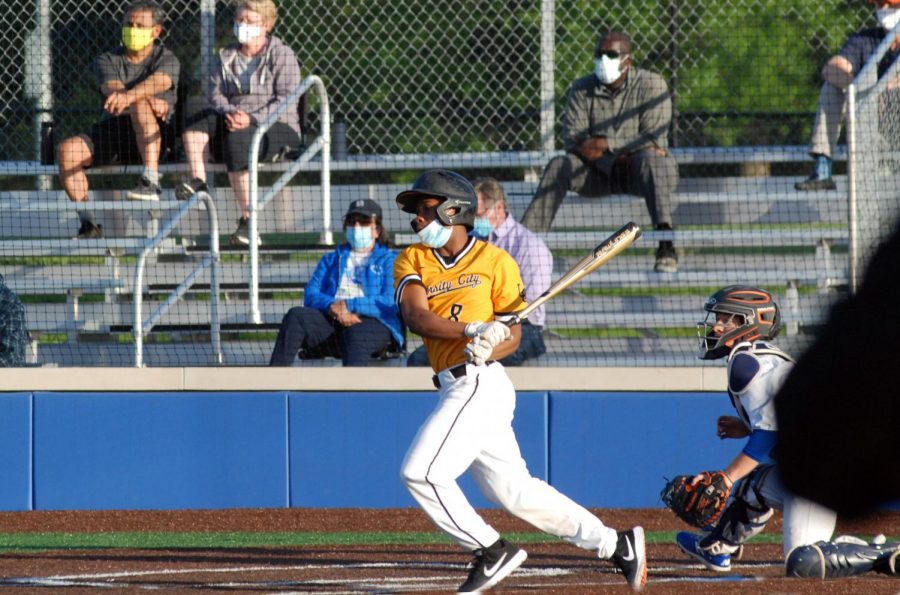 Josh Rhiney, senior, lines a ball to the shortstop in a 7-5 victory over Clayton on May 5.

Although a lost junior season hasn’t stopped a hot start from Josh Rhiney, senior, it has threatened to derail his post-high school plans. Rhiney, a baseball player, is among the leaders in batting average in the St. Louis metropolitan area, but missed last season because of the COVID-19 pandemic and a shoulder injury. This could possibly stop him from attending his dream colleges, since the window for many scholarships has passed.

“It’s been hard because 2021 baseball players lost their junior seasons, which is the most important high school season when it comes to being recruited,” Rhiney said. “During the summer, COVID prevented NCAA Division 1 and Divsion 2 scouts from being able to come to tournaments and recruit. Rhiney is still trying to get scholarships with the help of his coach, John Bass. Bass has been helping Rhiney since he came back from injury and has been a big support.

“I have contacted coaches about Josh,” Bass said. “[He] has done a great job in taking it in his own hands and reaching out to schools as well. It’s important for the student athletes to get involved in their recruiting efforts on their own, and he has done a fantastic job at that.”

Despite the injury, Rhiney has worked hard to get back into shape, with encouraging results. He currently leads the team in nearly all offensive categories with a .486 batting average and 15 RBIs.

“He plays hard, aggressive, [he has] a great knowledge of the game, and he’s a competitor,” Bass said.

Not only does his coach believe in him, but so do his teammates, including Justin Norman, senior.

“I think he’s very capable of playing after high school, as long as he keeps working hard,” Norman said. “He’s an all around great player and person. Any college will be lucky to have him.”

His skill extends outside of the game as an experienced team leader and motivator. Jack Forster, freshman, has noticed these aspects that Rhiney brings to the team.

“He’s good at explaining stuff,” Forster said. “He’s very athletic and quick, and he has a high baseball IQ. Keeps me motivated. When I make a mistake he doesn’t bring me down. He makes sure I know what I need to fix but does it in an uplifting way.”

Rhiney has recently come in contact with some college coaches, which is good news for him, even if they aren’t his dream schools.

“I eventually want to play for either Southern A&M, or Grambling State University,” Rhiney said. “[At this point], I like baseball too much to care about where I end up. I’ll be happy playing anywhere that wants me.”

Anyone who knows Rhiney recognizes his passion for the game, as well as his future.