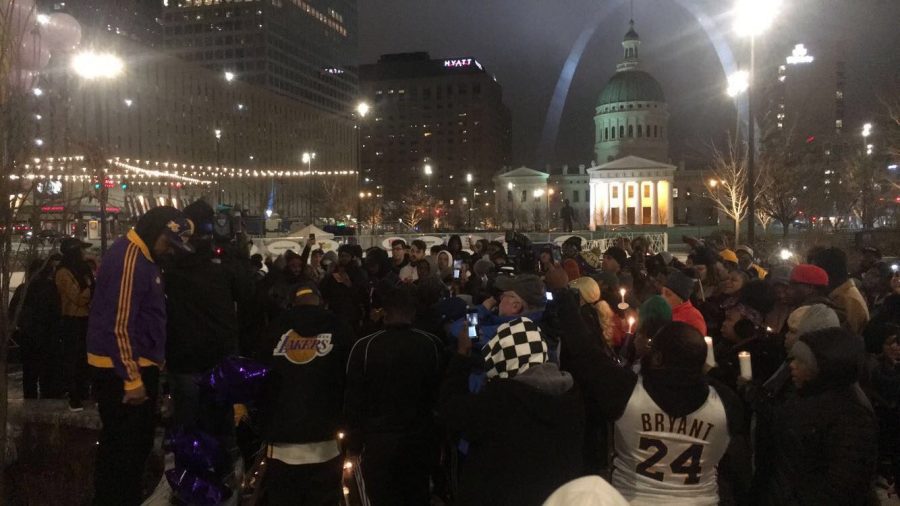 Fans gather to honor Kobe Bryant and his daughter Gianna Bryant after a deadly plane crash on Jan. 26.

When I first saw the Instagram post about the downtown vigil on Jan. 27 for Kobe Bryant, I was skeptical of its legitimacy and didn’t expect a large turnout, considering the fact that St. Louis has no direct connection to the NBA and the temperature was in the low 30s.

However, when I arrived at Kiener Plaza, about 100 people were there, most with candles in their hands and clad with Lakers gear. The tone was somber—but powerful.

Community members took turns speaking in front of a large arrangement of lit candles that read “Kobe,” accompanied by photos and balloons. Some speakers laughed, some cried, others sang or shared stories and thoughts, but every speaker had one thing in common—they were all inspired. It was at that moment that I truly realized the way in which Kobe has touched everyone’s lives. He was bigger than basketball. He was beloved by an entire city, and more than that, an entire country.

He was the guy we all grew up watching as we sat on our living room floors, mouths gaped in awe of his greatness. We yelled his name every time we sunk a basket in the gym, or even tossed a ball of paper into the trash can. Some of us hated him, some of us loved him, but we all respected him. We respected his determination, and the way he played the game. We respected his “Mamba Mentality.” We respected his advocacy for women’s basketball, and his devotion to his family. He was an amazing father, who did nothing but love, support and push his daughters. And for that, the world loved him.

This became clear on that cold January night as I saw hundreds of people from every walk of life playing their respects to Kobe Bryant. There were people of every color and every age, including dads with their little boys and girls perched on their shoulders, kids who would not get to grow up in a world with Kobe. Brothers, sisters and cousins gathered, arms around each other. A young boy held a basketball in one hand, his father’s hand in the other. Mothers of all ages craned their necks to get a better view. Friends stood in somber silence, reflecting on their Kobe-filled childhood. Tears rolled down some people’s faces, illuminated by their candles. Everyone held their loved ones close. As the world mourns together, we are all one, united by our love for Kobe and who he was both on and off the court.

After a firework show, the vigil ended at 8:24 pm, representing the two jersey numbers Kobe held during his career.

Kobe might not be alive, but that night made it evident that his legacy lives on. It will forever.