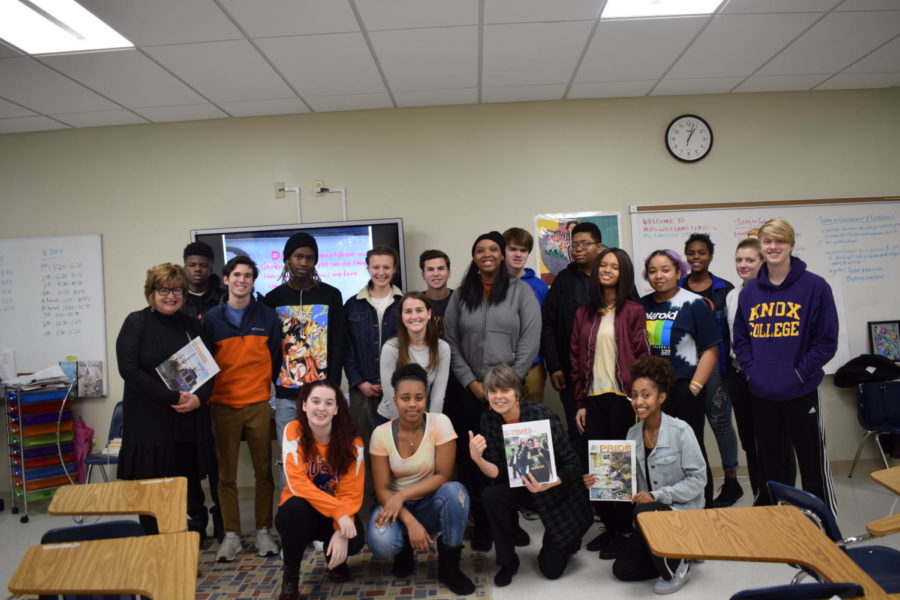 The term “activist” is defined as someone who campaigns to bring social or political change. With gun violence, racism and a president who doesn’t believe in climate change, the number of activists in this day and age is steadily growing.

Free speech activist Mary Beth Tinker, class of 1970, re-entered the halls of U. City on Jan. 17 for the first time since graduation to speak to journalism and government classes and serve as the keynote speaker for the Martin Luther King, Jr. celebration that evening.

Tinker served as one of the plaintiffs in the 1969 landmark Tinker v. Des Moines Supreme Court case that expanded students’ First Amendment rights.

After a career in nursing, Tinker decided to take to the road and speak to students about how to stand up for what they believe in.
Tinker traveled across the nation for the Tinker Tour in 2013-14, where she spoke everywhere from classrooms to conferences, and now spends most of her time advocating for student rights.

While speaking at U. City, she inspired students to muster up their courage to speak out about things they would like to change.

“You don’t choose when you’re born but you do choose what you do with the times you’re born into,” Tinker said.

Tinker’s humbleness and down-to-earth persona left students feeling positive about activism and ignited an inspiration in them.

“I really liked her explanation of why she did what she did because it showed how motivated and inspired she was and how she really cared about what she was doing,” Isabel Blumenhorst, junior, said. “She showed me that even at a young age it’s possible to make change.”

Blumenhorst wasn’t the only student who was impacted by Tinker’s motivational words.

Sierra Tyler, senior, was also moved by her words of encouragement.

“For her to have done something like that at such a young age is really inspirational,” Tyler said. “She made me realize I can do something and affect change, even if I’m afraid.”
One might think she grew up sure of her path in activism, but that couldn’t be further from the truth.

Growing up shy and introverted with little interest in social activism, Tinker never expected to impart this type of social impact. Tinker’s activism began in 1965, when she and a few other students, including her brother, decided to wear black armbands to school in support of a truce in the Vietnam War.

“We were getting sadder and sadder [about the war], but we didn’t know what to do about it, so some of the high school students had an idea: ‘what if we wear black armbands to school to mourn for the dead in Vietnam and say we should have a truce in the war,’” Tinker said. “I was really shy and I didn’t know if I should do it and the principal had made a rule against armbands.”

Despite Tinker’s hesitance, she followed through with what would be one of the most significant decisions of her life. Represented by the ACLU, the students and their families battled for four years in the courts, with the Supreme Court ultimately ruling that students “do not shed their constitutional rights to freedom of speech or expression at the schoolhouse gate.”

Tinker didn’t have much involvement in social activism after the decision, but realized far into her nursing career that teens needed a voice that could guide and educate them on their rights and responsibilities.

“I feel like it’s almost a responsibility to speak up about these things,” Tinker said. “Children all through our history — and teenagers, have spoken up and paid a high price to take our democracy forward.”

Tinker believes in students empowering themselves by going beyond the limits.

Tinker’s visit to U. City made one thing clear to the students, and that is we have the power and influence to make change in this world if we are willing to pay the consequences.

“You can still take action even with fear,” Tinker said. “Don’t wait till the fear goes away, because that could take a lifetime.”