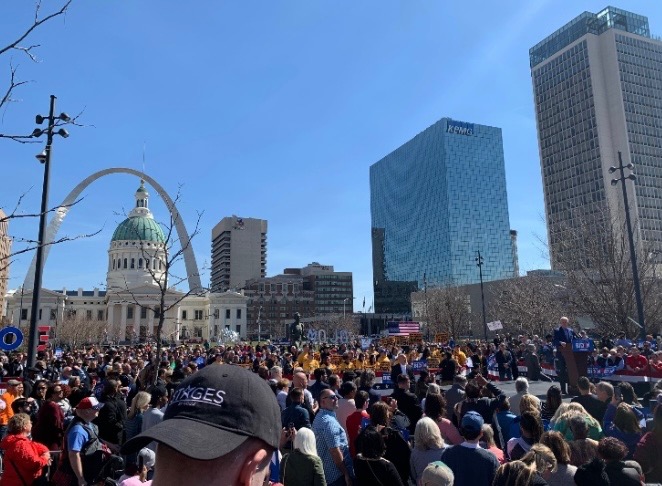 Biden at a rally in downtown St Louis on March 7

Between a worsening economy, people dying from the pandemic, and things starting to shut down again, it’s not an ideal time to be leading a country. However, despite all of that, President Joe Biden seems to have accomplished a lot in his first three months, keeping most of his campaign promises so far.

After his predecessor, there’s a lot to be “fixed.” A lot of people are counting on Biden to start moving the country in the right direction again.

“Biden is definitely moving the country in the right direction in a lot of ways, but much of this “progress” is really just undoing things Trump did during his presidency,” Marley Gardner, junior, said. “Many of his key promises center around the climate crisis, social inequality, and immigration. Notably, he’s rejoined the Paris climate accords, ended the Muslim travel ban, and made some moves to slow down deportation and speed up the citizenship process for undocumented immigrants.”

Out of everything he’s done so far, Biden’s response to COVID-19 is what many people have deemed as the most important.

“Nearly one-third of the U.S. population has received at least one dose of the vaccine,” Shawn Coleman, freshman, said. “This is so important because if this trend continues, then we will reach herd immunity by the end of the year. This is also good because there are new strains of COVID coming out and they could be deadlier and it could be entirely possible that this vaccine might help battle the other strains.”

Biden’s American Rescue Plan, which included another round of stimulus checks, implementing a national vaccination program to contain COVID-19 and safely reopening schools, plus financial assistance to small businesses (especially entrepreneurs of color), has been a huge help to Americans and America as a whole. Everything included in the plan is important, but people have placed more value on some parts than others.

“Financial assistance to smaller businesses [is the most important] because, for a lot of small businesses, that is how they keep food on the table, and a lot of them do not have the luxury of losing business at a time like this,” Coleman said.

However, as many people have appreciated his rescue plan, some think more should’ve been included, like the $15 minimum wage.

“I definitely think leaving the $15 minimum wage out of the stimulus plan was a huge mistake,” Gardner said. “Not only is minimum wage far from livable, but so many people are losing their jobs due to COVID, and with minimum wage jobs oftentimes the only ones available, it’s really important that those jobs make more livable wages.”

But after this plan, what’s next? There are still so many issues in this country that need to be addressed.

“After we get COVID to a manageable level and don’t have too many people dying every day, we have a lot of racial and social issues that we need to work out as a country,” Coleman said. “We are still feeling the effects of all the racial issues and now enough people want change that I think it could really happen.”

While some are focused on social issues, others believe Biden will move ahead with other things as well.

“I think that one of the following three things will be next on the Biden agenda: an infusion into green energy and jobs, expansion of Obamacare, or revisions to our immigration policies,” Michael Daly, social studies teacher, said. “I don’t know if he will try to pass a Green New Deal, but I do think he will try to do something on this front.”

Just having Biden’s presence as a leader offers comfort to some people, something that is a big change from the last four years.

“Overall, I feel that there is a calming tone that has spread over the U.S. since he was inaugurated,” Coleman said. “He doesn’t insight panic of any sort. He gives us answers and transparency, something his successor rarely did.”

It’s a popular stance that Biden has done many good things so far, but he still has a long way to go.

“Honestly, he could be doing a lot more in his position,” Gardner said. “To me he feels more like a life preserver. The reason he won the election was because the majority of Americans, with the far right aside, were able to come together and agree that he was the lesser of two evils, and our country really needed that. He’s keeping us afloat in the sense that he’s spent much of his time thus far reversing a lot of the bad stuff Trump did, and getting the pandemic under control, both of which are very important. However, there’s still a lot of people who are (metaphorically) drowning and that in itself means that there’s a lot more work to be done until I could feel satisfied with Biden, or any other president’s performance.”

If you want a picture to show with your comment, go get a gravatar.