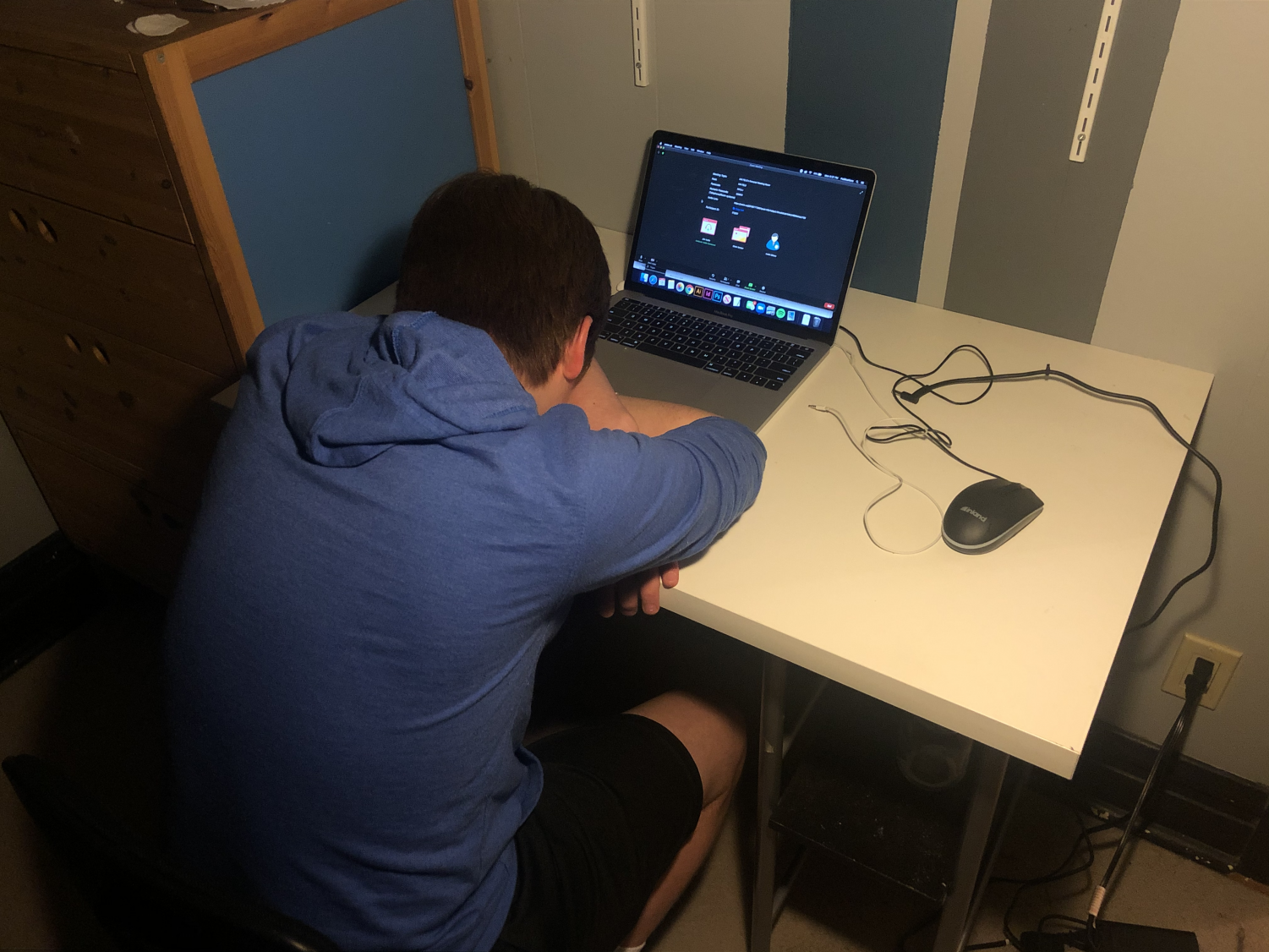 After a turbulent and tiring first semester, students are ready for changes to online learning. (Photo by Ian Feld)

After a turbulent and tiring first semester, students are ready for changes to online learning.

Students and staff prepare for second semester of distance learning

With many schools around the country returning to some form of in-person learning, U. City High School remains one of the last hold-outs in St. Louis County for fully online education. After a first semester filled with black squares, internet failures and virtual meetings, the student body became well versed in the nuances of distance learning and adamant that there needed to be some adjustments.

Many, such as Sienna Yadzi, freshman, felt that the sheer amount of screen time was unhealthy and hard to manage.

“[S]tudents sit in front of their computers for about seven hours a day with very short breaks in between classes,” Yadzi said. “All of our homework is also online, so I don’t get much physical activity throughout the day, or even after school.”

In a world that becomes increasingly online-dependent, the excess of time spent on a computer can make school work seem more tiring than usual, as Zakija Glenn, junior, notes.

“I feel like the workload is a lot, especially since I’m in AP classes,” Glenn said. “It feels like it piles up more so than with in-person learning.”

Glenn believes that one reason for the workload disparity was the irregularity of work across her different classes, which creates a tough dynamic to manage.

“There’s no consistency in the amount of work we get,” Glenn said. “It is very inconsistent across all my teachers.”

Another potential drawback to the online work experience comes from the obvious lack in personal interaction. A freshman student, who wished to remain anonymous, felt that the discrepancy between online and in-person work arose because of the dull nature of remote learning.

“It bothers me that we get the same work and assignments as [in-person] education, but not the incentive of social interaction,” she said. “The quality and quantity of assignments need to be modified.”

While it’s easy to point to problems, it can be difficult to troubleshoot in an online setting. The same student acknowledged the difficult jobs of school administration and teachers, but did not discount the toll that that experience has taken on their mental health.

“In my opinion, the administration’s communication surrounding distance learning expectations is great, those expectations are just overwhelming,” the anonymous freshman said. “My mental health has largely deteriorated.”

Other students, like Nate Martin, senior, took a less complicated view of their first semester experience.

“It just kind of sucked,” Martin said. “I spent way too much time on my computer and overall it was not a very productive semester.”

Like many of his peers, Martin attributed his sub-par experience to the time spent online, specifically the drudgingly-long A and B day class periods.

“Hour-and-a-half long classes are way too long to spend on Zoom,” Martin said. “I wake up, get on Zoom, have a short break for lunch and get back on zoom. Then I take a break after school and do homework on my computer until I go to sleep. It’s draining.”

Student concerns were not lost on the administration. Michael Peoples, principal, remains cognizant of the difficulties associated with distance learning but maintains that the state of distance learning looks positive entering the second semester.

“It is not ideal for anyone to hold school under the current circumstances,” Peoples said. “In terms of our execution, I am very proud of how our teachers put the needs of the students first.”

Though Peoples believes that distance learning in first semester was a success given the circumstances, he admits that the process wasn’t perfect. In second semester, Peoples plans to focus on improving student engagement in class by limiting their time spent staring at a screen.

“Teachers need to lecture less and empower student voices,” Peoples said of concerns around screen time. “It all starts with planning. We need to build the capacity of teachers to plan lessons that create discourse within the classroom.”

Peoples’ method for engagement—promoting classroom discussion of topics—is not lost on students. Yadzi claims that the most enjoyable aspect of online learning comes from group participation.

“I enjoyed having open discussions in my classes,” Yadzi said. “It has been hard these past few months to form bonds and connections with some of my classmates, so I love when we get time to speak and learn more about each other.

“[The administration is] working around our schedules,” Glenn said. “They want to work with us, not against us.”

Peoples wants to ensure that students feel that their concerns are listened to. He notes that there are multiple ways in which they can voice their opinions.

“I have an open door policy,” Peoples said. “You can schedule a meeting with me any time. We have a student focus group under Wash. U. that can be accessed by reaching out to Mrs. Woodward. We also have a student advisory panel that is randomly selected from the student body.”

Peoples also mentions that the counseling department sends out quarterly surveys, and points to final exam changes as a positive impact from them.

“I personally review all of the feedback, and I take every concern very seriously,”  Peoples said. “As a result, I found it appropriate to reward students who had worked hard and implemented a harmless final exam schedule and moved the final to before break.”

Even if the schedule changes don’t perfectly solve the issues of distance learning, Peoples is confident that the adjustments will make a difference in the well being of students. Although the classroom is virtual, Peoples continues to emphasize the importance of effective, student centered instruction. He has stressed that teachers reduce screen time in class and continue to extend forgiveness to students under duress, which he hopes will combat a main qualm of the student body.

Said Peoples, “As always, the priority is the quality of instruction, but we need to make sure that we extend grace to students and their families.”

Much to the benefit of those struggling with distance learning, new schedule changes are set to be implemented when the second semester begins on Jan. 18. After the decisions to shorten class periods, lengthen lunch and delay start times in the morning were made, students and teachers were given the chance to vote on a schedule. The result of the voting was a continuation of the U-U-A-B weekly calendar that ran through the first semester, combined with the adjusted daily class times. Wednesdays remain academic support days and no classes will be held. A full weekly schedule can be found below. 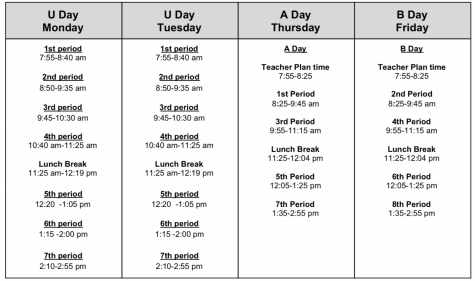 I don’t think it’s gonna work with distance learning because it’s hard to focus on a computer screen for that amount of hours each day plus homework.”

I was concerned over the lack of substance in some classes. It seems like we just do busy work.”

I think we can voice [our concerns] all we want, but I don’t know if anyone is listening.”

It’s hard for kids with bad attention spans because there are so many distractions at home.”

It seems as if everything that was holding me accountable has evaporated, and I’m completely responsible for protecting myself from my own procrastinating tendencies…it’s hard to bring energy to class every day”

I feel like it’s getting harder and harder to be interested in online classes, and that’s not really a fault of the school but more just a product of the situation”

I can’t access my classes sometimes so I won’t understand [all of] my assignments.”

I feel like majority of teachers have been understanding of our struggles during these times…I am very appreciative of that.”

I liked the freedom and the independent of distance learning. Gives me time to work in an environment that is comfortable to me.”

Most teachers genuinely enjoy and encourage interaction and participation from their students. They are always willing to work with you and can be as flexible as needed when you communicate.”

I enjoyed the freedom that we had to an extent, having Wednesday’s off to do work and allowing for students to complete and do work whenever works best for them for the most part.”

I enjoy not having to get up as early. I’m more functional and feel better overall when my morning doesn’t have to start so early.”

I can definitely voice concerns to my teachers; they’ve all made it clear that they’re open to feedback.”

I enjoyed being able to eat lunch at home, spend time with my family, and cuddle with my dog in between classes.”